Following on from the recent MX-5 Mk1 & Mk2 Buyers’ Guide, we purchased our own 1989 Eunos Roadster. To demonstrate what to expect when buying an MX-5 at the very bottom of their price range, we threw caution to the wind and bought a car in perhaps the worst possible way – sight unseen.

Going into the purchase, we kept telling ourselves that if the worst came to the worst, we would be able to break the car to recover our costs. However, rather than throwing the towel in early, we will be showing exactly what needs to be fixed in order to get our little roadster to the track, without putting it on a trailer.

Why BOFI Racing needed to buy an MX-5

Already having both an NA and an NB in the BOFI stables, you may be asking “Why do you need another MX-5?”.

To develop parts, we wanted a rough and ready car that could be used and abused without any remorse – if the car suffered a catastrophic failure during testing, it needed to not matter. With The Blue Peril’s import-fresh paint still in mint condition, and Gail the Snail already being turbocharged, neither of the cars already in our ownership fit the bill.

Before we started our hunt for an unassuming project, we set about writing a short list of buying criteria. In case we ever decided to race the car, our choice was dictated by rules set out by the BRSCC. This meant we needed a 1.6 Mk1 Mazda MX-5.

Setting a budget that would make Pistonhead’s Shed of the Week blush, we set added three additional criteria – any car we bought needed to be unmodified, a JDM import, and without any rust. For less than £300. A tall order, when the best cars are starting to appreciate.

Immediately, we began scouring eBay. The first car that drew our attention was a 1990 1.6 automatic in classic red. The perfect candidate to create a How-To on automatic to manual conversions, it came complete with faded red paint and a generous helping of lacquer peel.

The car was described as having a sound shell, wheel arches and sills. However, unable to find the year the car landed on our shores, patches of rust on the driver door and passenger wing indicated it was likely to be hiding more corrosion than first met the eye.

The listing suggested that mechanically all appeared to be in good shape, except for seized rear calipers. A quick search on the MOT database highlighted instead that the car hadn’t been on the road since July 2013, and at that time it had failed the test on two broken rear springs and a non-functioning headlamp.

Whilst the mechanical defects weren’t a deal breaker, learning that the automatic has softer cams and a lower compression ratio, was. We would have happily ripped out the auto, but swapping the entire powertrain on a £300 car just wasn’t on the cards.

Instead, we turned our attention to a crash damaged 1989 1.6 manual, also in classic red. The photos appeared to show just a minor bump on an otherwise honest looking car.

This time, the car was described as being an ideal race car project. Despite having been sold the car on that statement alone, the listing stated that aside from the obvious damage, the soft top would also require replacing. However, when Daniel Marshall has an entire 1.6 Eunos in his garage, minus the shell, coming by replacement parts isn’t much of a problem.

Not convinced that the listing was completely transparent, the MOT database again yielded some interesting points. In May 2015, the car had failed on excessive corrosion to the sills. Alarm bells rang when just five days later, only an advisory for slight play in the driver side top strut mount remained.

Too late. Auction fever had set in, and the car was won with a single bid of £250.

Any new car needs a name. In this case, the car needed fixing before it would see the road again. It seemed apt to call it Gwyneth because Fix You by Coldplay was about Gwyneth Paltrow, the ex-wife of lead singer Chris Martin.

Our little red Roadster is number 110166, making it the 10,145th car to roll off the production line. Whilst not being particularly special, it does mean that it is early enough to retain a lot of the quirks the first cars came with; The hood catches are gloss black instead of matte, and there is no boot release inside the car. Unfortunately, we didn’t get the opportunity to purchase the hard top that was on the car, which should have also had matching gloss black catches.

The car appears to be relatively untouched, with only minor modifications such as a Japanese FM converter, which allows the JDM radio to be used in the UK. Peculiarly, there is also a CD player installed, although the faceplate is missing. We won’t be needing that, because as previously stated – racecar. General wear and tear to the interior is minor: the Nardi wheel just needs a fresh coat of lacquer, and the worn gear knob needs replacing with a BOFI Racing 7″ stick.

And what about the elephant in the room? The damage claimed:

And at this point, our shoe-string budget means we be repairing the:

Overall, with just a little bit of time and after pilfering a few parts from Daniel’s hoard, Gwyneth will be ready to smoke one tyre at a time.

On the face of it, Gwyneth looked like a fairly solid example. The next morning, we set about evaluating its true condition. We already knew the car was SORNed, and for £250 we weren’t surprised when it didn’t have a history file. With that in mind, we set about working through the BOFI Racing Buyers’ Checklist.

The first thing we noticed were some rather suspect repairs to the rear sills. This was backed up by the only bill included with the car, which stated all of the excessive corrosion had been repaired for £100! Repair panels had been bought and welded straight over the top, masking any horrors lurking underneath. Whilst definitely not the worst bodge we’ve ever seen, they haven’t been repaired in the right way. Sure, it will pass the next MOT or two, but at some point we’ve got reason to believe we’re going to be dealing with some significant repairs.

We’ve got ourselves a short nose crank. These crankshafts have been known to fail if the keyway in the crank nose is installed incorrectly after a cambelt change. We knew this would be the case when buying a car this early, so the real question here is what condition is it in? There appears to be none of the tell-tale pulley wobble, and the engine pulls strongly. This would indicate to us that for the moment, we’re in the clear. Preventative maintenance will be carried out along with a cambelt change, consisting of a new bolt, key, and a good helping of Loctite.

Elsewhere on the engine, the Cam Angle Sensor o-ring is leaking, and because no history is present we can’t be sure when the cambelt was last changed. As the engine is non-interference, we could live life dangerously and continue to run the car, but we’d rather not be stranded so it will receive a full set of belts and a new water pump before it sees any track work.

Oddly, the Roadster was fitted with Mud and Snow tyres on the rear in 2015, but the front tyres are over eight years old and beginning to crack. Once the body work has been repaired and the car is roadworthy, we will celebrate with a series of one-tyre-fires.

The hood has a couple of minor splits across the door seals, and there is a tear each side above the rain channel. Nothing a cheap repair kit shouldn’t be able to put right.

Under the bonnet, the coolant expansion tank was empty. Even when left for a few days at a time, the car doesn’t produce any white smoke. Checking the oil, despite being dirty it doesn’t show any signs of water contamination. The low level is probably related to the small amount of coolant around the top tank of the radiator, and the plastic turning brown indicates that it’s definitely due a replacement.

After adding up all the niggles using the buyers’ checklist, Gwyneth sits firmly in the Racecar category. That being said, we’re surprised you can pick up anything better than a dedicated drift car for less than a half-decent TV. We would have ideally liked an MOT, but that’s probably asking to have your cake and eat it.

In the fresh light of the morning, it appeared less like this post should have been titled How Not to Buy an MX-5 and more How to Spend £250 and Get Yourself a Bargain. All we needed to do was straighten the inner wing and replace the outer wing.

At least that’s what we thought.

Over the coming weeks we will be detailing exactly what is needed to get Gwyneth back onto the road – from the process of straightening the inner wing, to what horrors were uncovered when undertaking other repairs. 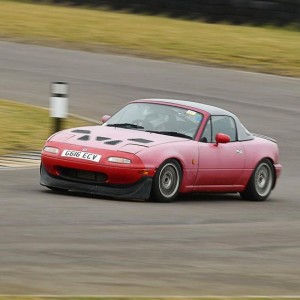